So, this is the thread for political debate, new golden glories and memories of Olympics' past….

Having opened the political debate, I'll also throw out the first great Winter Olympics memory.  Not only is this one of skiing's great moments, but it would very possibly make my top 10 all-time list of great sporting moments (F1 legend Jackie Stewart puts it at No.1 on his list).

In the Blue Riband Men's Downhill of 1976, Franz Klammer, was already regarded as perhaps the greatest downhill skier of all-time.  However, in his home games, the pressure was on The Kaiser to deliver the gold medal that all Austria craved.  This was Jessica Ennis times 100, and perhaps even greater than the pressure on Cathy Freeman in Sydney 2000.

The last of the favourites to go, Klammer threw himself down the mountain like a man possessed, clinging on numerous times when he seemed to have lost control, before crossing the line in the fastest time.  In addition to winning gold for himself and his adoring public, Klammer's heroics also prompted the BBC to launch a new series called Ski Sunday, which in turn inspired generations of Brits and Irish to make an annual winter pilgrimage to Europe's mountains.

Really looking forward to the Winter Olympics, it will be less of a spectacle without Lindsey Vonn to Grace the 'Gay Free Games',although the presence of Cool Runnings will bring the novelty factor up slightly! A more detailed viewpoint will follow....
_________________
Follow our Twitter feed @Global_GAA

The 1988 games would be the ones that resonate most with me. Possibly pre-sky and heavily televised. Eddie the eagle and cool runnings for novelty, at the business end natty nukanen, KatArina Witt, Pirmin Zubriggen and Alberto Tomba.

OMAR wrote:
The 1988 games would be the ones that resonate most with me. Possibly pre-sky and heavily televised. Eddie the eagle and cool runnings for novelty, at the business end natty nukanen, KatArina Witt, Pirmin Zubriggen and Alberto Tomba.

Ah, who could forget any of those, especially the lovely Katarina.  Choc-full of Italian arrogance, Tomba 'La Bomba' was perhaps the sporting star of the Calgary games, but Edwards captured the imagination of sports fans everywhere.

Matti Nykanen was a phenomenal ski jumper, perhaps the best ever, but his life quickly went off the rails (http://en.wikipedia.org/wiki/Matti_Nykänen)

'The Miracle on Ice'. 1980, Lake Placid, and the USA's amateurs beat a hugely fancied USSR team 4-3 to reach the final. Perhaps the most famous ice-hockey match ever played, and one of sports greatest upsets.

Torino 2006. Dominating the women's snowboard cross final from start to almost finish, American Lindsay Jacobellis decides to showboat on the penultimate bump, grabbing her board, twisting, falling, and losing the gold medal as a result. I think it's safe to assume that Lindsay's sporting philosophy is more closely aligned to that of Jean van der Velde rather than Jim McGuinness.

Vancouver 2010.  A 19 year old Korean living in Canada, Kim Yu-Na had the weight of expectation from two countries on her shoulders.  Favourite for the gold medal, she produced perhaps the greatest performance skating has seen, demolishing the world record.  Balance, agility, athleticism, power and style (and not a gumshield in sight) - this is my idea of women's sport.

The story of Dan Jansen is one that always sticks with me when the Winter Olympics comes around, He'd not long won 3 Speed Skating Gold Medals when the Calgary games came round and he was hotly tipped to walk away with golds in all his events. Only thing was, his sister Jane was dying after losing her battle with leukemia. On the morning of his 500m event, his sister died but wanted him to win Olympic Gold for her so he stayed and raced instead of going home. Unlike most stories of this ilk, Dan stumbled and fell in the 500m and was knocked out, he repeated this feat in his other race and walked away with nothing.

He failed to medal at the next Winter Olympics in Albertville in 1992, and Lillehammer was to be his final chance. He failed to medal in his first race, leaving him with only the 1000m as his chance to get a medal for his sister. He subsequently slipped in the opening corner (i think) but regrouped to smash the World Record and finally get the Gold medal he badly wanted.
_________________
Follow our Twitter feed @Global_GAA

Wasn't aware of that one, BE - the guy must have been desperate for that gold at the last attempt. Another great olympics story.

Fair play to Putin for answering the critics - the opening ceremony couldn't have been more camp if they'd tried.

Brilliant opening ceremony TC, Russia/USSR through the ages. I thought they done it very well too, obviously missing out on a few unsavory elements of their history as you'd expect!
_________________
Follow our Twitter feed @Global_GAA

bald eagle wrote:Brilliant opening ceremony TC, Russia/USSR through the ages. I thought they done it very well too, obviously missing out on a few unsavory elements of their history as you'd expect!

Agreed, although anything with the incredible Anna Netrebko in it gets a big thumbs-up from me!

I enjoyed the rest of it too; as you say, it was a great ride through Russian history. The War & Peace segment was particularly superb.

It's a shame that, on the whole, the Russkies are such a cold bunch. I was in St Petersburg a few years ago and thought it was amazing to look at, yet there was no warmth or friendliness from the locals. I pity the guy who built the malfunctioning snowflake...

Men's Downhill tomorrow morning. Here's Graham Bell taking it nice and easy on the course, with no poles and a camera in his hand. Major cojones required…

Fair play to Putin for answering the critics -

Ah! a great aul' crowd, reminiscent of ourselves at the zenith of the Tiger days, when the head of state proved he was in fact "a man of the people"..... 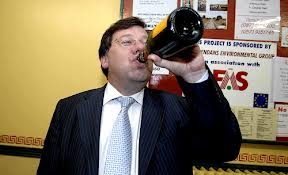 So, Bode Miller failed once again to win a major Olympic gold medal, and this time it was the downhill that was his undoing. Miller was ahead of eventual winner Matthias Mayer after the second split, but threw in his usual big mistake and finished 7th. Bode, classy as ever, blamed the snow, the light, the visibility and his draw number, despite being beaten by men who started both before and after him.

Mayer's win will be hugely popular in his native Austria, as skiing's most successful ever nation has found it difficult to produce major alpine stars in recent years.

Ireland have received some recognition at Sochi.  Alas, it wasn't the type of recognition that we wanted.  As we weren't going to win any medals on the piste, you'd have thought that we could at least have made an effort with our costumes for the opening ceremony, instead of merely issuing the team with decommissioned IRA jackets from the 1980s.

The hosts, on the other hand, may be many things, but they do know how to look good… 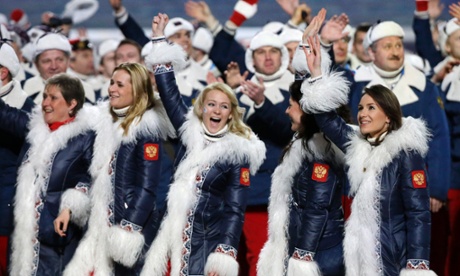 American/Global superstar Shaun White has made a mess of his first run in the final of the HalfPipe.  'The Flying Tomato' lies in 11th and, barring a miracle second run, this would be the upset of the games, in what is usually the most watched event on television (because of White).

It's already been a bad week for white, who was accused of cowardice for pulling out of the Slopestyle event due to 'safety concerns'.

And White finishes in 4th, behind a Swiss and two Japanese teenagers.  Serious event with such incredible power and athletics required, not to mention (as is the case with most of these winters sports), mega-cojones.  Talking of which (figuratively), it's time for the women's ski jump...

It's been a bad day for Putin.  Not only did his ice-hockey team crash out to the Finns, but also his security forces decided to whip the Pussy Riot girls in front of the cameras.  No wonder he looks so sombre in these 2 pics…

I have been gripped by some of the talent on display at the womens curling, particularly some of the Swedish & Canadian ladies are extremely pleasing on the eye!
_________________
Follow our Twitter feed @Global_GAA

bald eagle wrote:I have been gripped by some of the talent on display at the womens curling, particularly some of the Swedish & Canadian ladies are extremely pleasing on the eye!

And the Swiss Miss with the pierced tongue this morning - I watched their match against the Brits, and still have no idea who actually won! 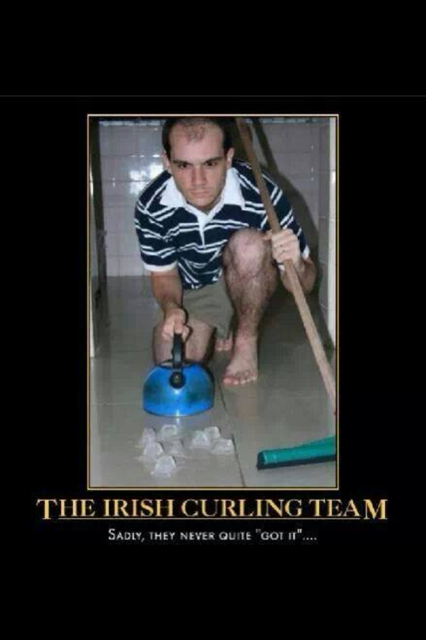 A parishoner of our own made huge efforts to qualify for these games but the OC said Nay!!!!

» What is wrong with Meath football?

» Greatest U21 side of all-time